I recently spent quite a bit of time setting up an Amazon Elastic Container Service cluster on AWS. Creating all the required resources from scratch was a bit more involved than I’d hope for so it left me wondering if there was a better way for developers who want on-demand containers without having to set up and manage the networking infrastructure and resources required to start working with ECS.

So, I figured let’s give Azure Container Instances a try! I think it worked out pretty well. Let’s take a closer look, if you prefer the Tweet-consumable version of this, I also made a thread on my experience with it:

Tweeting my first look at @azure container instances, I was fed up with having to literally create dozens of #AWS networking resources to get a single ECS container running so let's see how #Azure does it!

For this demo, I assume you already have an Azure subscription and you have the Azure CLI setup on your machine and that you have a little experience with Docker but I don’t directly use it in this guide.

The first thing we do is to create a resource group that our container will be put in. We can do this from the Azure CLI with:

Then I just create the container? After coming from ECS that seems… too easy? But let’s try it using the default image that Azure gives us in the docs and trying to claim my snazzy fernando subdomain:

For me, the command stalled for about 60 seconds before it provided a - Running ... prompt to me. Seems like a weird experience to wait on a CLI command, I’d expect it to register the command and then I could check on the status but I supposed this isn’t a bad thing as I’m probably going to want to know when it finishes.

Presumably there’s some sort of --dont-show-me-the-status-just-create-it-and-ill-check-later flag I don’t know about to solve problems with scripting this out. What’s that you say? It’s --no-wait? Ahh. Well, yeah I suppose that makes more sense.

One confusing part is that the documentation says I’m supposed to check on the result with this:

So this part was a bit confusing. Do I need to wait and then run the command? Or can I just wait as it seems like it’s ready when it finishes?

When I do run the show command it returns the ProvisioningState of my container:

HAH! I totally snagged the fernando subdomain - Sorry other Fernandos in the West US - I GOT HERE FIRST! With this provisioned, let’s check it out. 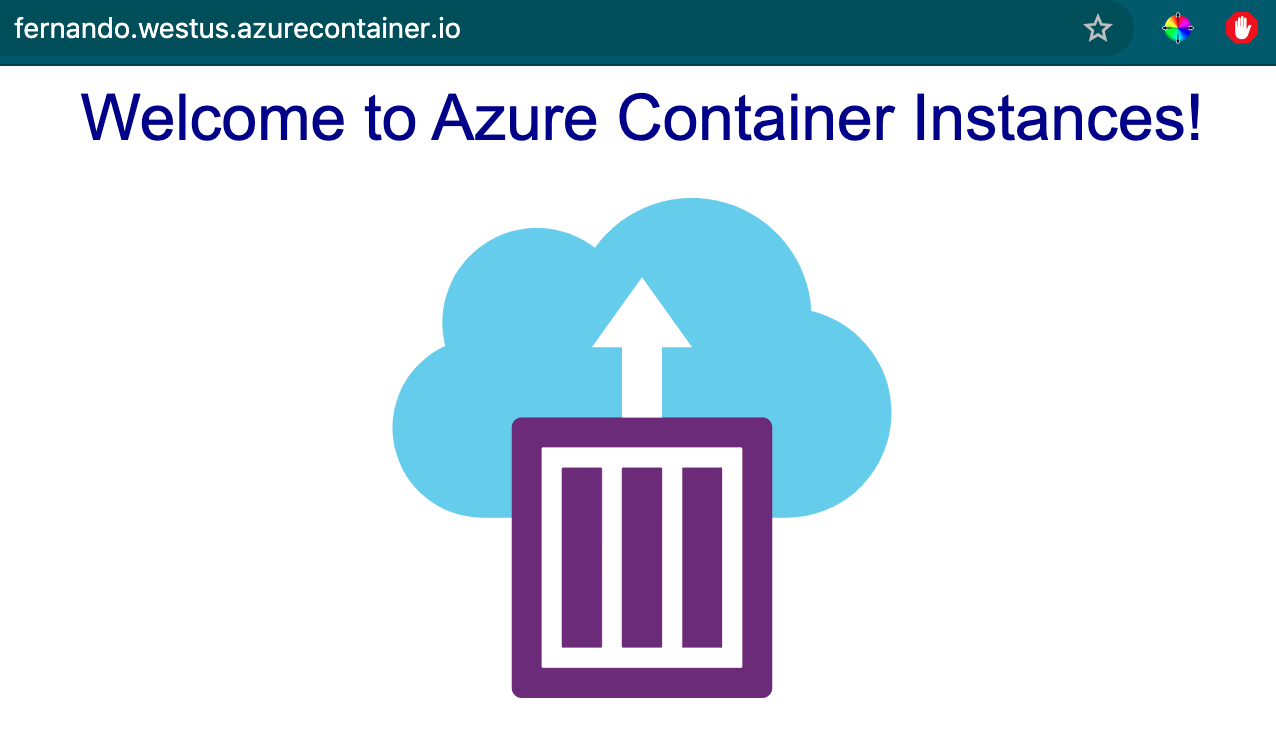 A beautiful, pretty boring demo app. But there is some magic in that I only had to run two commands to get it up.

Getting this same damn thing with AWS ECS took me about twenty minutes of configuring a VPC, Subnets, Security Groups, Internet Gateway, ECS Cluster and Task and some other things I probably forgot.

Ok so what if I want something more interesting in here though. I’ve been playing around with Theia recently for other tinkering so let’s see how hard it is to get a custom Docker image up as a Container Instance.

We could probably just run the same commands as before and replace the image name with the Docker image name I want right? Let’s give it a shot:

After 3 minutes and 35 seconds (yes I timed you Azure Container Instances team!) the CLI told me the container instance was up and running. To get the new domain name again I used:

And here we are:

Unfortunately, I clearly don’t know how to use Theia at all so loading the container at that URL timed out. Possibly because I need to configure a different port.

From what I can tell, there is no az container update which is mildly confusing but I supposed I can just try the create command again with a new port number and hope for the best!

I love it when guesses work out! It appears like this operation worked and it only took ~10 seconds as opposed to the actual creation of the container instance which was a few minutes.

Unfortunately, even though my configuration now appears to expose TCP traffic on port 3000 I’m still unable to get any response. Let’s see what’s happening under the hood:

Basically, it appears like Theia is configured with 0.0.0.0 with port 3000 and from the command I ran earlier I know port 3000 should be exposed? This, in combination with the long list of installation logs and out means that in all likelihood I just didn’t wait long enough for all these dependencies to install.

After visiting the link again I now have the Theia container running and functioning as I expected: 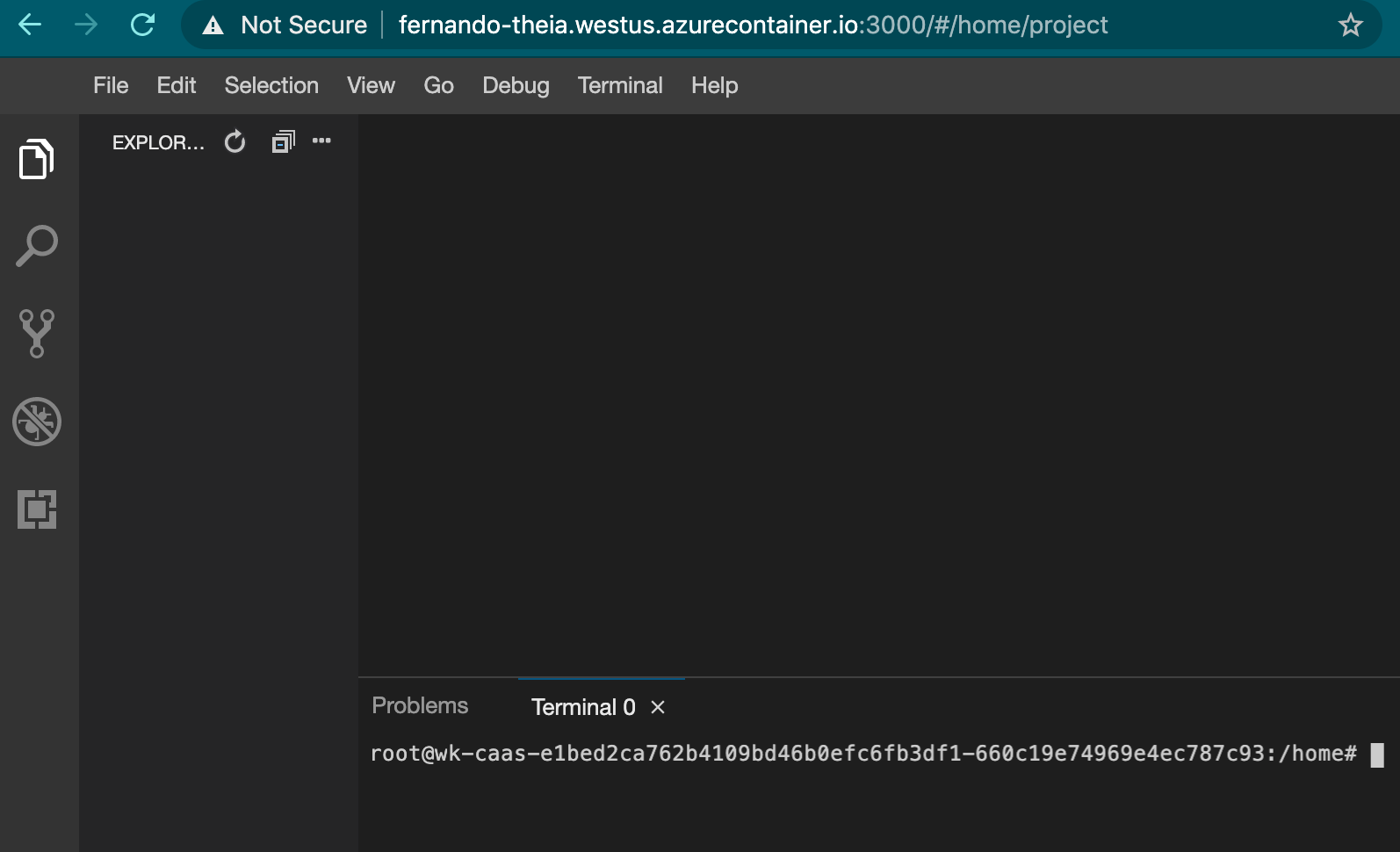 It comes prebuilt with Node and Python, perfect for some messing around with and integrating in later projects.

But what if I’m not a fan of making myself go to port 3000 when I visit this? In other systems I might be able to set up some port mapping from port 3000 to port 80 so I can visit the domain without the port suffix.

Unfortunately, it appears in this Azure Feedback post that there is no support for anything other then symmetrical port mapping. This means I either have to modify my container or be satisfied with port 3000. Ahh well! Another day.

Finally, time to make sure I clean up my resources so I’m not paying for them:

Remember to answer y to those prompts.

I found getting started here pretty fun. I do have some option questions that I might dive into in later posts. For example:

Overall though, I find this model of deploying containers a lot more intuitive and simple to get started with. Do you want to see more about Azure or about Azure Container Instances? Leave a comment below or reach out to me and let me know!

Have questions or comments or just want to learn more? Join me (Fernando) in the Moonrise Labs Discord!